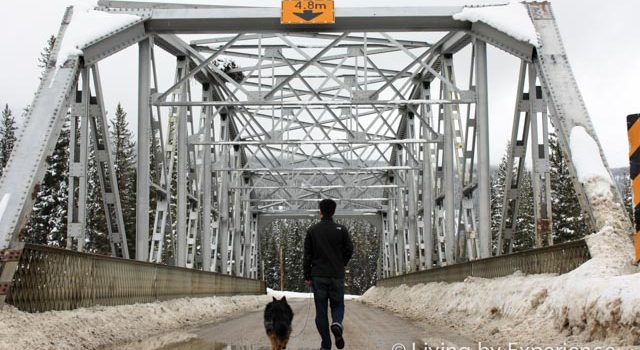 The wrong side of the road

calgary44
Question for all dog owners: do you train your dog to walk left or right of you? Somehow mine ended up on my left...

Question for all dog owners: do you train your dog to walk left or right of you? Somehow mine ended up on my left hand side. I never thought much about the idea, it just kind of naturally happened that way. We both seem to be fine with that arrangement, however, to my surprise not everyone agrees. And that’s putting it nicely. As I learned this week, some strongly disagree. I apologize for my ignorance thus far.

The whole left and right thing seems rather important. As a kid I got in trouble at school for being left handed. My teacher said it was a handicap and treated me as mentally disabled as a result of her own limited mindset. Once you get used to a certain way of thinking, that becomes the default way of doing things unless you’re motivated to make a conscious effort to change it. Which I never planned on doing anyway, despite her abusive remarks.

Driving on the “wrong” side of the road as they do in the United Kingdom and some of their subsidiaries like Jamaica, Australia and a handful of other islands works similarly: left is right and right is suicide. As long as you follow the other traffic you’ll be fine. My biggest trouble with driving on the left hand side occurred when there was no other traffic to follow around early in the morning. Traffic circles or “roundabouts” also are tricky. Even when I remembered to go about it clockwise instead of counterclockwise, I forgot the other traffic was coming at me from the right hand side. They should add those “look to the right” signs they have in London to traffic circles too, in my humble opinion. It might have saved one of my nine lives.

But back to dog walking. When my dog walks on my left, she pees and poos on that side too. Get the picture? Since she’s trained to do that in the grass, which seems to be the preferred location over the middle of the road, I sometimes end up walking on the “wrong” side allowing her to do her business. Also, it puts me as a shield in between her and other children and adults who aren’t always keen to be greeted by my shepherd. I’m aware that Canadians tend to stick to the right hand of the road, despite still being a British subsidiary at some level. I guess the reasoning might be that we’re not on an island, but part of a larger continent. Also Canadians are believed to be very friendly, and apologetic even if you are the one bumping into them. So now imagine this immigrant’s surprise when I got purposely bumped into by a runner the other day, who was visibly upset and yelled at me I was on the “wrong” side of the “road”. Exercise is evil.

I still don’t really get the point. One step sideways would have avoided the whole situation. Anticipation to what’s happening around you makes life generally a lot easier. It avoids accidents, too. I’m glad she wasn’t in a car. Besides, we were on a walking path, not a road. Even when I did end up on the wrong side of the road in some small British town they didn’t got that upset with me. In true British tradition, they just laughed at me (while sounding the horn).

My experience must be the new Canadian way. I’m sorry, eh.

WILKO VAN DE KAMP is the author of #1 international best seller The Freedom Project and several other books and e-books. He's also an award-winning photographic artist, and professional world traveler. His inspiration comes from traveling all over the world. He calls the Canadian Rocky Mountains his home, and the rest of the world his office. He has been capturing our wonderful planet, and it's beautiful inhabitants, for more than half his life. Wilko has spent his life traveling the world to capture awe-inspiring images for those who wouldn't see them otherwise, and to inspire others to embark on their journey of a lifetime. Through his art, writing and appearances as a keynote speaker he enjoys sharing his colorful experiences with the world. Visit him online at www.wilko.ca

The story behind fear and bad experiences in life

The You I Can’t See

Living Abroad For 13 Years: What I Promised Myself

Where Was This When I Created My First Online Course?

Do you smell the social media bull sh*t? Here is my guide on how to do it right

How To Read 30 Books A Month

© All rights reserved. You may not use content from this blog without written permission, but you may link to the posts or give out a link to the posts. Affiliate Disclosure: I am grateful to be of service and bring you content free of charge. In order to do this, please note that when you click links and purchase items, in most (not all) cases I will receive a referral commission. Your support in purchasing through these links enables me to empower more people worldwide “just fly”. Thank you! :)